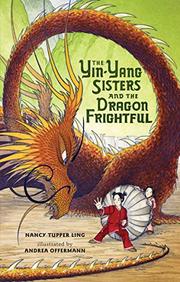 THE YIN-YANG SISTERS AND THE DRAGON FRIGHTFUL

Can two sisters conquer the dragon who terrorizes their village?

The villagers of Woo are supremely inconvenienced by an ornery dragon who takes up residence across a bridge that connects their homes to the market. That same day, the Lee twins are born, one as fierce as the other is mild. Their auntie predicts that, like yin and yang, the two will be stronger together and defeat the dragon. The prose riffs satisfyingly on folklore conventions; readers and listeners will especially appreciate the repeated refrain: “Still, they were sisters. They stuck together.” Offermann’s stirring pen-and-ink–and-watercolor illustrations create a deeply textured world, moving seamlessly from breathtaking vistas to intimate close-ups. A double-page–spread image of the two girls as infants, snuggled together in a round basket, so aptly captures the concept of yin and yang, with a smart reference to the icon. Precise harmony eludes the narrative though, which devotes much more time to the thoughtful, “oozy”-feeling Mei, who arguably could have handled the dragon alone, than to fierce Wei. And for a story so clearly informed by imperial China, missed opportunities (additional resources about yin and yang, use of Chinese characters rather than scribbles in the illustrations) and misdirection (fabricated names and spelling conventions that approximate actual places or things) leave it treading near appropriation.

Not quite a perfect balance here—but visually delightful nonetheless