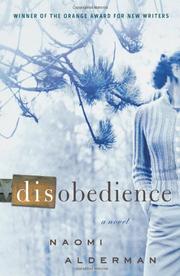 Can an Orthodox Jew be a lesbian? Two women, one a rabbi’s daughter, find different solutions to the problem.

Hendon, the setting for British Alderman’s debut—and Orange Prize finalist—is a London suburb with a large Orthodox Jewish community. Its rabbi, the scholarly, charismatic Krushka, is dying. He is being cared for by his nephew Dovid, also a rabbi, and the man already chosen to succeed Krushka by synagogue board president Hartog, who sees Dovid as submissive and malleable. The fly in the ointment is Dovid’s wife, Esti, a woman quiet to the point of eccentricity. The other female troublemaker is Krushka’s 32-year-old estranged daughter, Ronit, who’s been living in New York since her father sent her there to complete her schooling. The flamboyant Ronit’s brief return from New York provides the match for the tinderbox. Ronit and Esti were not just schoolgirls together; they were lovers. Each woman is still attracted primarily to her own gender, though Ronit has been having an affair with her New York boss, a married man. She has renounced the Orthodox world and its stifling expectations of conformity (“Orthodox Jew Barbie: comes complete with Orthodox Ken”), while Esti has remained true to her religion, though she is eager to resume her relationship with Ronit. What follows is a complicated dance involving the two women and the gentle, good-humored Dovid. Each chapter begins with a page of lucid commentary on the scriptures, which put the protagonists’ floundering in a religious context. However, their Olympian tone is an intrusive feature in a novelistic landscape of satire and character development. Thus, although there are effective scenes (the attempt by the villainous Hartog to bribe Ronit to stay away from the hesped, or memorial service, and Esti’s uncharacteristic “outing” of herself at the service), they don’t combine to form a satisfying narrative flow.

A mishmash, but not without promise.