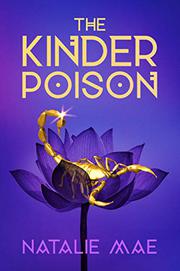 Zahru and her best friend, Hen, sneak into a royal party and, by the end, Zahru has been marked as the human sacrifice in the first Crossing in centuries. The ailing ruler of the Orkena kingdom calls for this brutal tradition, which will see his three heirs racing across the desert, the victorious one being the first to reach the end and kill the allegedly chosen-by-gods sacrifice. As a lowly Whisperer able to communicate with animals, living in a land where the rulers are the ones with the rarest magic, Zahru knows more than anyone what having power truly means. As she is traded among the three heirs traversing the desert, she needs to use all her skills to avoid being sacrificed in the end. Zahru’s unexpectedly humorous inner voice, the rich worldbuilding full of political intrigue, a slow-burning romance, and a fantastic set of well-developed characters (both friends and foes) mark this exciting and refreshing tale of power and accountability. Against a backdrop of danger, betrayal and challenges, Zahru opts for kindness and hope every time she faces a life-or-death choice, with thought-provoking results. Zahru has fair skin; secondary characters (including her love interest) have brown skin. This diverse world includes queer characters.

A funny, rewarding story for fans of optimistic tales with a bite.