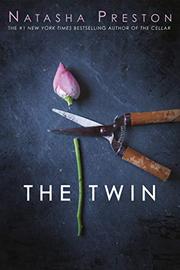 After a family tragedy, 16-year-old Ivy Mason hopes to reconnect with her aloof identical twin sister, Iris—but Iris has other plans.

When Ivy’s parents divorced 10 years ago, Ivy stayed with her father while Iris went to live with their mother. When their mother dies after falling off a bridge while jogging, Iris comes to live with Ivy and their father. Narrator Ivy is reeling (she even goes to therapy), but Iris seems strangely detached, only coming to life when Ivy introduces her to her best friends, Haley and Sophie, and her quarterback boyfriend, Ty. However, Ivy isn’t thrilled when Iris wants to change her class schedule to match hers, and it’s not long before Iris befriends Ivy’s besties and even makes plans with them that don’t include Ivy. Iris even joins the swim team where Ivy is a star swimmer. As Iris’ strange behavior escalates, Ivy starts to suspect that their mother’s death might not have been an accident. Is Iris up to no good, or is Ivy just paranoid? In the end, readers may not care. There are few surprises to be found in a narrative populated by paper-thin characters stuck fast in a derivative plot. Even a jarring final twist can’t save this one. Most characters seem to be white, but there is some diversity in secondary characters.

A lackluster take on a well-worn trope.