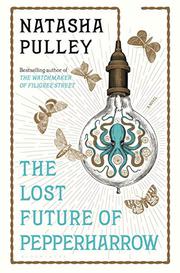 THE LOST FUTURE OF PEPPERHARROW

More steampunk adventures of a samurai prognosticator, his clockwork octopus, and his human lovers.

Five years after her charming debut novel, The Watchmaker of Filigree Street (2015), Pulley brings back the main characters for another scramble through the dangers and consequences of clairvoyance. Readers of the first book already know the big reveal: that Keita Mori—the eponymous London watchmaker—has an unusual memory that works both backward and forward. (Readers new to the series should put this book down and start with Watchmaker.) This time Pulley sets the action principally in Japan, where Mori; Thaniel Steepleton, a British translator and diplomat; Grace Carrow Matsumoto, a physicist; and Takiko Pepperharrow, a Kabuki actress and baroness, are working together to foil a samurai’s power grab and turn away a Russian invasion. At least, that’s what Mori’s doing; the others are rushing blindly down paths he’s laid out for them, which may or may not get them where he wants them to go. But if Mori knows what’s coming and what steps they can take to change the future, why doesn’t he just tell them what to do? The answer is half satisfying (because, as in any complicated relationship, communication isn’t always easy; because the characters have wills of their own and might not obey) and half irritating (because if he did, there wouldn’t be much of a story). Pulley’s witty writing and enthusiastically deployed steampunk motifs—clockwork, owls, a mechanical pet, Tesla-inspired electrical drama—enliven a plot that drags in the middle before rushing toward its explosive end. Perhaps more interesting than the plot are the relationships. The characters revolve through a complex pattern of marriages of passion and convenience, sometimes across and sometimes within genders and cultures, punctuated by jealousy and interesting questions about trust.

Although this sequel doesn’t break new ground, it will appeal strongly to fans of the first book.