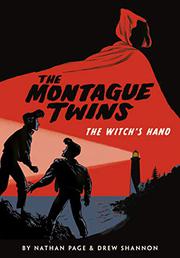 From the Montague Twins series, volume 1

An adventure set in a New England town in the summer of 1969, a time period well referenced in the art and text.

Twin brothers Alastair and Peter Montague are surprised when their summer activities move from rescuing the dog of Roger Bradford—business mogul and descendant of Port Howl’s colonial founders—to becoming embroiled in a mystery packed with action, suspense, and magic. The boys live with David, a professor; his truck-driver wife, Shelly; and the couple’s daughter, Charlie. After harrowing experiences involving a decrepit lighthouse and a robed, hooded figure with a clawlike hand, the three teenagers are determined to figure out what evil is lurking below the surface of Port Howl. When David learns what they are up to, he enlists his protégé, Rowan, to help him reveal to the twins their unusual history—and to teach them and Charlie how to use magic responsibly. Meanwhile, Bradford’s daughter, Rachel, engages two friends in scrying—with scary results. The full-color illustrations in nostalgic tones evoke classic comic book art. The artwork is emotionally expressive, enhancing the characterization. Humor and character development abound along with thoughtful musings as the novel skillfully entwines its subplots into a tale that ties up every loose end by the time the United States has had its first successful moon landing. One character’s coming out is handled sensitively. Main characters are white; Rowan and a secondary character present as people of color.