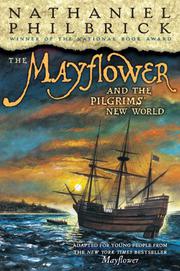 THE MAYFLOWER AND THE PILGRIMS’ NEW WORLD

This elegant, absorbing account of the first two generations of Pilgrims sets the record straight about the first Thanksgiving and the following five decades. The chronological narrative, shortened from Mayflower, Philbrick’s 2006 work for adults, details the initial uneasy alliance of Pilgrims and local tribes. As more settlers arrived wanting land, tensions increased and finally the King Philip’s War ensued, causing the death of about 70 percent of local Indians and eight percent of male colonists. The eye-opening descriptions make no bones of the brutality of the colonists, who slaughtered trapped women and children and triumphantly displayed enemies’ heads on posts at Plymouth Colony. The author masterfully brings both sides to life with an evenhanded sense of their complex motives and cultural differences. The many quotes are usually attributed to a source in context, but there are no endnotes and only a limited reading list. A “List of Characters” and detailed timeline, along with well-captioned visuals and a series of maps, make the complicated narrative easy to follow. (Mayflower passenger list; index not seen) (Nonfiction. 12 & up)