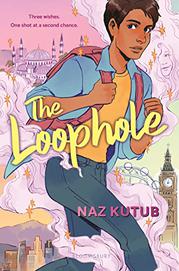 Breakups are awful, but they are even worse when your ex hustles off to another continent.

Seventeen-year-old Sayyed Nizam, a recent high school graduate, is left behind in Los Angeles, twiddling the ring his ex-boyfriend, Farouk, gave him and dealing with Baba, his harsh father, who governs the household with a firm hand. But one day at Sy’s cafe job, help arrives with a literal bang with the dramatic appearance of mysterious Reggie, a wealthy and eccentric English teen heiress in distress who offers him three wishes in exchange for his help (and an egg salad sandwich). After Baba discovers he is gay and kicks him out of their house, Sy finds himself on a private plane with Reggie, crossing the ocean to London in search of Farouk. As the story alternates between the struggles faced by present-day Sy and flashbacks to scenes from Sy and Farouk’s charming romance, it also tells a parallel heroic quest through the story “Hamza and the Djinn.” Replete with pop-culture references, elements of fabulism, and dollops of romance, Kutub’s debut is ambitious. It succeeds in covering a gamut of themes, including what it’s like being brown-skinned and facing Islamophobia, experiencing heady first love, and exploring one’s identity. As Indian American Muslim Sy recalibrates his idea of family and love, he discovers facets of himself and his relationships, adding poignancy to the story that packs a punch.

An intense read that’s packed with adventure, humor, and lots of soul.