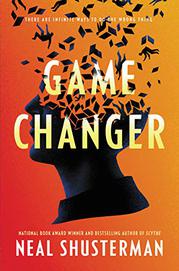 A timely, speculative thought experiment in perspective, privilege, and identity.

Ash Bowman is a White, heterosexual boy who doesn’t think too deeply about the plights of others. That is, until a jarring football injury shifts him into a parallel universe. At first, the changes to Ash’s world are small: Stop signs are blue, not red, for example. Then, with every tackle, Ash transports himself into a new reality, and the changes become much more pronounced. Characters change gender, social class status, sexuality, or even live in a world where racial segregation still exists. These changes in perspective prompt Ash to cultivate a greater sense of empathy and urgency regarding the suffering of others. But as reality becomes increasingly unstable, he must set the world back to rights. Ash is a clever, sincere narrator, and his journey of self-discovery is well-paced with solid twists at nearly every chapter’s end. But the project ultimately attempts to tackle too much, covering abuse, racism, homophobia, misogyny, class privilege, and more; this leads to little time and nuance dedicated to each. Unlike in real life, characters typically possess a single marginalized identity, and the interplay between struggles for progress in different areas is not explored, oversimplifying matters. The joys of queer love are shown, but experiences of being female or Black are largely presented in terms of oppression. Additionally, characters from marginalized populations are generally used for Ash’s own character development.

A well-intentioned project whose earnest messages of empathy and equality fall short in execution.