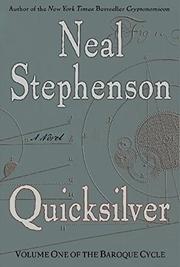 Vol. I, the Baroque Cycle

First in a trilogy about vagabonds and alchemists in Baroque Age Europe.

You should never—never—accuse Stephenson of not doing his homework, not least because it’s not true, but also because he might then feel compelled to footnote, and then his already-sizable tomes will approach encyclopedic length. The meandering, dense narrative in this case proves one thing: he needs an editor. And that editor needs a machete. This is a thick knot of story that spans America and Europe during the late-17th and early-18th centuries. The first and final thirds concern the explosive leaps in scientific knowledge, impossibly complex political intrigue, and bitter Protestant-Catholic fighting that characterized Western Europe, especially England, during this time. These sections star Daniel Waterhouse, fledgling member of the Royal Society, a semi-secret cabal of cutting-edge scientists and alchemists, as well as learned individuals such as Samuel Pepys and Isaac Newton. Sandwiched in between is a roustabout adventure that hopscotches all over the continent, from the Turkish siege of Vienna to the burgeoning capitalist mecca of Amsterdam. Principal among these events are Jack Shaftoe (distant ancestor of a character from Cryptonomicon, 1999), a none-too-bright mercenary with a penchant for barely escaping hideous death, and the clever Eliza, rescued from a Turkish harem by Jack, and quickly set on a path of ambitious social-climbing among the French nobility. Stephenson mostly does away with plot and contents himself with letting his characters jape and amble about the place, engage in erudite, pages-long discussions on alchemy, slavery, or religion, running into fascinating people, and staging a smashing action sequence every now and again to keep everyone awake.

An incorrigible showoff, Stephenson doesn’t know when to stop, but that’s a trifle compared to his awe-inspiring ambition and cheeky sense of humor.