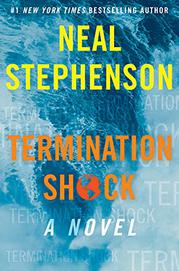 In the all-too-near future, when unlikely weather events and natural disasters aren’t so unlikely anymore, an eccentric and wealthy Texan makes a move against climate change.

Saskia, better known as the Queen of the Netherlands, crashes her plane on an airstrip in Waco, Texas, when wild pigs overtake the runway as she's landing. Saskia’s visit to America isn’t exactly official, so she and her team enlist Rufus, who happens to be on the runway hunting the vicious boar that killed his young daughter, to help them get to Houston to meet T.R. Schmidt. While America as a nation is “a clown show,” Schmidt has the money to do as he pleases, and what he pleases to do is construct a massive gun that can shoot sulfur into the atmosphere and help ameliorate the effects of global warming. He’s invited people like Saskia, some Venetian aristocrats, and representatives of Singapore and other places that have the most to lose from a rising sea level to see what he’s been working on. When Schmidt starts up his gun and it actually works, a huge global debate emerges. Is Schmidt’s geoengineering scheme the best step to take? What will happen to global weather patterns with all this sulfur in the air? Will other countries choose to build their own guns or try to put a stop to Schmidt’s actions? Stephenson’s latest novel clocks in at more than 700 pages, and as usual they practically turn themselves as the multiple storylines twist together. This book is the rare climate thriller that's realistic about political stonewalling in the face of disaster yet unafraid to imagine a possible future where people might actually come together and try to save civilization.

The kind of climate-change fiction we all need.