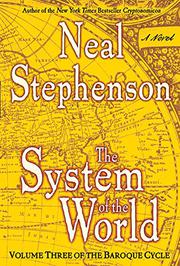 THE SYSTEM OF THE WORLD

One thing that becomes obvious on reading this third and final volume in Stephenson’s genre-defying historical reinvention (Quicksilver, 2003; The Confusion, p. 107) is that the author was right to say the work wasn’t a trilogy, but just one long (nearly 3,000-page) novel. Another thing is that it’s a hell of a way to finish things off. We’re in the early 1700s now, and the characters are a bit older (Quicksilver started in the 1640s) but no less active, physically or mentally. The loquacious Daniel Waterhouse is still serving England as a member of the Royal Society, and the bulk of this last installment follows his attempts to stop a plot threatening the lives of his fellow scientists with a nefarious invention: the time bomb. As prolix as Waterhouse and his comrade-in-long-windedness, Isaac Newton, can be in their scientific discourses, it’s nothing compared to the mind-boggling stew of conspiracy that’s London, with Tories and Whigs battling for position and civil war threatened over the possible ascension of the Hanoverian Princess Caroline to the throne. While the back-and-forth can be dizzying, Stephenson’s droll humor (he even tosses in an anachronistic Monty Python joke) and knack for thrilling set-pieces—the meticulously plotted escape of a Scottish rebel from the Tower of London is a tour de force of its own—act as guiding lights through the political murk. On the periphery, the onetime slave and now Duchess Eliza uses her own considerable diplomatic skills to advance her shadowy goals, and after far too long a delay comes the return of the fabled Jack Shaftoe, the Indiana Jones of the series. Stephenson knows that the inimitable Shaftoe is ultimately the star and provides him with a crowd-pleasing exit as heart-poundingly exciting as it is surprisingly emotional.

Learned, violent, sarcastic, and profound: a glorious finish to one of the most ambitious epics of recent years.