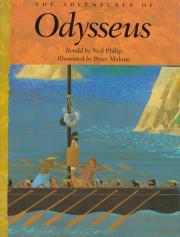 THE ADVENTURES OF ODYSSEUS

Philip (American Fairy Tales, 1996, etc.) competently retells the famous Greek story of Odysseus's ten-year journey home from the Trojan War, beset by the wrath of Poseidon, various monsters, witches, and his own pride. Some changes have been made, e.g., the fleet is destroyed in a storm, not by the cannibalistic Laestrygonians, who are absent from this version. On the other hand, the Cyclops' killing and eating of several of Odysseus's men is described graphically enough to sate elementary-school bloodlust. What sets the book apart from the competition are the vivid, glowing illustrations. Malone uses stylized figures in archaic poses that seem to have been adapted from Greek vases; he employs brilliant colors and skewed perspectives to dramatic effect. With a beautiful map of the voyage and an illustrated guide to the principal characters, an already grand story has become a sumptuous visual feast. (Fiction. 8-12)