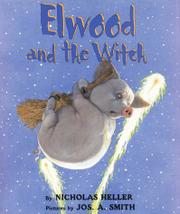 ELWOOD AND THE WITCH

by Nicholas Heller & illustrated by Jos. A. Smith

Elwood the pig’s chance encounter with a witch’s broom sets magic in motion. Shuffling through the woods one moonlit evening, he comes across a broomstick. “This will do nicely to keep my front step swept,” he figures. But when he grabs the broomstick and it begins to shimmy and shake and drag him across the mossy ground, he gets an intimation that all is not what it seems. When it flies off into the night sky with Elwood aboard, and a witch comes crashing out of the underbrush—“She had been in the woods collecting bitter roots and poisonous toadstools when she saw Elwood go sailing past”—he knows just what he has gotten himself into. The witch demands the broom’s return; Elwood would be only too happy but he can’t—“I don’t know how!” The witch isn’t listening. She threatens and then hurls a spell at Elwood. It misses, hits an unsuspecting bat, which is turned into a trout. Then a cloud is transformed into a giant toad when the spell skirts past Elwood. All the while Elwood is shouting that he can’t control the broomstick, but the witch, raving with imprecations, is deaf to Elwood’s pleas. Only when she turns the Moon into a great bumblebee with another wayward spell, and the bee says she’ll give the witch a good stinging unless she is turned back into the moon, does the witch pipe down. She directs Elwood to earth, and considers turning him into a worm, but the Moon is now guarding Elwood, who continues on his night stroll. A pleasing enough tale, simply written with sly, subtle humor, though mostly a platform for the illustrations, which are grand spreads of emotion and activity and deep color. Capturing the bright clueless look in Elwood’s eyes and a touch of the sinister in the witch’s raging expression, Smith creates exactly the right amount of hysteria to put the story over the top. (Picture book. 5-8)