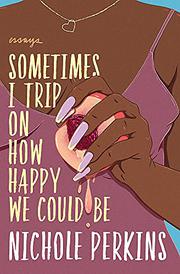 SOMETIMES I TRIP ON HOW HAPPY WE COULD BE

A thoroughly enjoyable journey into the mind of a beloved pop-culture commentator.

Perkins is a 2017 Audre Lorde fellow and host of This Is Good for You, a podcast for pleasure seekers. In this collection of essays, she interweaves pop-culture observations with deeply personal vignettes of self-discovery in a fickle and sometimes dangerous world. The author is unafraid to lay herself bare, and she boldly recounts the ups and downs of her life as a Black girl and woman. At the beginning of the book, Perkins recalls how, when she was 5, a naptime kissing bandit smooched her and other unsuspecting female classmates, waking her up to the power of femininity even then. Growing up during the 1980s and ’90s in Nashville’s Black community, she always had her nose in a book, seeking knowledge wherever she could find it. She struggled with her abusive, drug-addicted father, and while she looked up to her older sister, she also protected her autistic younger brother. Despite an early realization of the importance of pleasure, she was often at odds with her mind, battling depression and weight-related self-esteem issues. Her struggles often left her restless but never helpless, and part of the book includes a love letter to bygone days. Perkins describes how the Prince song “Girl” provided a sexual awakening, and she pays homage to Janet Jackson’s “all-black uniform,” which she learned was chosen so she could look slimmer. An unabashed fan of Frasier (“what I use as a regular antidepressant”), the author writes about her crush on Niles Crane and her online chat-room connections with others seeking safe, impersonal, but real digital camaraderie. Refreshingly, Perkins doesn’t deliver a standard happily-ever-after ending. Nobody is coming to save her from her circumstances, and that’s OK. She continues to strive and persevere by honing the ultimate secret weapons: self-acceptance and self-care.

Fans will appreciate this closer look into Perkins' life and adventures, and newcomers will get to know her well.