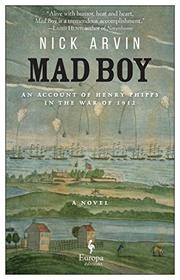 Across the battlefields of the War of 1812, a young boy races to carry out his mother’s dying wish and rescue his father.

When 10-year-old Henry Phipps’ mother is killed in a bizarre accident, he strikes out over the Maryland countryside to give her a burial at sea and free his alcoholic father from the Baltimore prison where his unpaid gambling debts have landed him. Arvin (The Reconstructionist, 2012, etc.) neatly blends conventional narrative, including vivid accounts of the British attack on the "muddy, malarial village" that is Washington, D.C., in August 1814 and the bombardment of Baltimore’s Fort McHenry that inspired Francis Scott Key to compose the “Star-Spangled Banner,” with refreshing touches of magic realism, like the voice of Henry’s deceased mother that guides him at key moments on his perilous journey. Henry is an engaging, resourceful hero of this picaresque tale, displaying endurance, ingenuity, and commendably mature generosity in his frequent encounters with soldiers, thieves, peddlers, and prostitutes, without ever losing passion for his twin goals. The story is seasoned with a well-drawn cast of supporting characters, including Henry’s sturdy older brother, Franklin, who survives a mock execution for desertion from his militia unit; a British soldier named Morley, who switches sides to fight with the Americans though his loyalties lie only with himself; and Radnor, a former slave who sees his best chance for permanent liberation in a victory of the redcoat army that welcomes his service. Arvin heightens the drama with a subplot that has several characters engaged in a race to recover two stolen sacks stuffed with gold and silver coin. At less than 250 pages, the novel is a masterpiece of compression without sacrificing character development to the demands of the relentless action and adventure. Sandwiched between the nation-defining glamour of the Revolutionary War and the epic conflict of the Civil War, the War of 1812 hasn’t garnered comparable attention in the world of fiction. Arvin’s robust novel helps redress that imbalance.