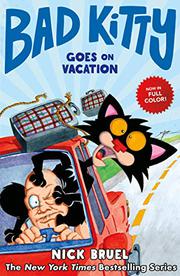 A trip to the Love Love Angel Kitty World theme park (“The Most Super Incredibly Happy Place on Earth!”) turns out to be an exercise in lowered expectations…to say the least.

When Uncle Murray wins a pair of free passes it seems at first like a dream come true—at least for Kitty, whose collection of Love Love Kitty merch ranges from branded underwear to a pink chainsaw. But the whole trip turns into a series of crises beginning with the (as it turns out) insuperable challenge of getting a cat onto an airplane, followed by the twin discoveries that the hotel room doesn’t come with a litter box and that the park doesn’t allow cats. Even kindhearted Uncle Murray finds his patience, not to say sanity, tested by extreme sticker shock in the park’s gift shop and repeated exposures to Kitty World’s literally nauseating theme song (notation included). He is not happy. Fortunately, the whole cloying enterprise being a fiendish plot to make people so sick of cats that they’ll pick poultry as favorite pets instead, the revelation of Kitty’s feline identity puts the all-chicken staff to flight and leaves the financial coffers plucked. Uncle Murray’s White, dumpy, middle-aged figure is virtually the only human one among an otherwise all-animal cast in Bruel’s big, rapidly sequenced, and properly comical cartoon panels.