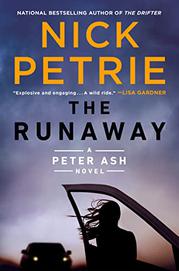 Ex-Marine Peter Ash defends a pregnant teenager from her murderous husband in this heart-thumping thriller.

Nineteen-year-old Helene is desperate to escape Coldwater, Montana, population 2, “the crossroads of no place and nowhere.” Her mom died in a car accident, and now she’s alone except for the sleazy Bogaloosa, who “smells like fermented armpit,” underpays her at Bogaloosa’s Gas and Grocery, and wants to have sex with her. So she cadges a ride from a long-haul trucker named Roy Wiley, who lavishes gifts on her. Sure, he’s given rides to other girls, but Helene is something special. Roy is special too, and not in a good way. He and his partner, Frank, rob “wealthy jerks who live somewhere else” across several Western states. Helena is pulled into Roy’s orbit and finds that she can’t leave, because he’s a murderer who is obsessed with her. She feigns love, and they marry in Nevada. But Roy is one seriously scary dude who kills for pleasure—sometimes sexual pleasure. She escapes, but her car breaks down. “Vastly pregnant,” she asks a passing motorist, series hero Peter Ash, for a ride. Ash is an ex-Marine plagued by “white static” in his brain, compliments of his combat days in Iraq and Afghanistan. Roy and several cohorts are chasing them both. Ash risks everything to protect this total stranger, and a hair-raising pursuit follows. Readers might guess the story’s outcome, but the trip is violent and downright frightening fun. And they will admire Helene, who will do anything to protect herself and the baby in her belly. She believes that “fortune favors the bold.” Roy is obsessed with her and the mistaken thought that she’s having twins, but if he ever finds out the truth, she’s dead. The monster is a bottomless wellspring of shootings and neck snappings, and the story’s survivors tie up the plot in a neat bow.

This is one hellacious ride for crime fiction fans.