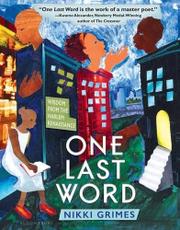 Wisdom From the Harlem Renaissance

Timely and thought-provoking, Grimes’ collection transports young readers through the enduring expressiveness of the Harlem Renaissance, juxtaposing classic poems of the era with her own original work and full-color art by contemporary African-American illustrators.

Grimes’ choice of form, the Golden Shovel poem, does the magic of weaving generations of black verbal artistry into a useful, thematic, golden thread. A challenge indeed, the structure demands taking either a short poem in its entirety or a line from that poem, known as a “striking line,” in order to serve as the foundation for a new poem in which each line ends with one word from the original. With this, the classic opening line of Jean Toomer’s “Storm Ending” (“Thunder blossoms gorgeously above our heads”) is reinvigorated within new verse as Grimes reminds young readers that “The truth is, every day we rise is like thunder— / a clap of surprise. Could be echoes of trouble, or blossoms / of blessing.” Grimes joins the work of historic black wordsmiths such as Georgia Douglas Johnson, Countee Cullen, Langston Hughes, plus the less-anthologized yet incredibly insightful Gwendolyn Bennett and Clara Ann Thompson, with her contemporary characters and thematic entanglements to bring forth a Harlem Renaissance that is as close to the present as the weight of injustice and unfulfilled promise that they spoke through.

This striking, passionate anthology reminds young readers and adult fans of poetry alike that while black life remains “no crystal stair,” there remains reason to hope and a reserve of courage from which to draw.