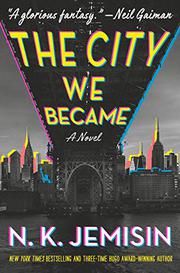 THE CITY WE BECAME

From the Great Cities series, volume 1

This extremely urban fantasy, a love/hate song to and rallying cry for the author’s home of New York, expands her story “The City, Born Great” (from How Long ’Til Black Future Month, 2018).

When a great city reaches the point when it's ready to come to life, it chooses a human avatar, who guides the city through its birthing and contends with an extradimensional Enemy who seeks to strike at this vulnerable moment. Now, it is New York City’s time to be born, but its avatar is too weakened by the battle to complete the process. So each of the individual boroughs instantiates its own avatar to continue the fight. Manhattan is a multiracial grad student new to the city with a secret violent past that he can no longer quite remember; Brooklyn is an African American rap star–turned–lawyer and city councilwoman; Queens is an Indian math whiz here on a visa; the Bronx is a tough Lenape woman who runs a nonprofit art center; and Staten Island is a frightened and insular Irish American woman who wants nothing to do with the other four. Can these boroughs successfully awaken and heal their primary avatar and repel the invading white tentacles of the Enemy? The novel is a bold calling out of the racial tensions dividing not only New York City, but the U.S. as a whole; it underscores that people of color are an integral part of the city’s tapestry even if some White people prefer to treat them as interlopers. It's no accident that the only White avatar is the racist woman representing Staten Island, nor that the Enemy appears as a Woman in White who employs the forces of racism and gentrification in her invasion; her true self is openly inspired by the tropes of the xenophobic author H.P. Lovecraft. Although the story is a fantasy, many aspects of the plot draw on contemporary incidents. In the real world, White people don’t need a nudge from an eldritch abomination to call down a violent police reaction on people of color innocently conducting their daily lives, and just as in the book, third parties are fraudulently transferring property deeds from African American homeowners in Brooklyn, and gentrification forces out the people who made the neighborhood attractive in the first place. In the face of these behaviors, whataboutism, #BothSides, and #NotAllWhitePeople are feeble arguments.