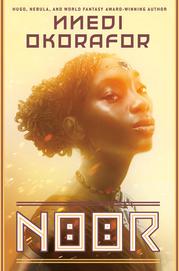 Okorafor has defined Africanfuturism, once and for all, in this tale of scapegoats and revolutionaries.

All Nigeria has seen the videos—the Igbo cyborg killing five men in the market, the Fulani terrorist shooting a villager in cold blood—but few know what happened to drive the two killers into the Sahel Desert. AO and DNA killed in self-defense: She to protect herself from a lynch mob that demonized her technologically advanced prosthetics, he to save his cattle from villagers who mistook him for a terrorist. Thrust together when their paths cross while on the lam, AO and DNA set their sights on the one place they hope no one will look: a secret community of outcasts living in seclusion at the heart of the giant Red Eye storm. Okorafor grounds AO and DNA's world as an extension of our own, a world in which William Kamkwamba, Greta Thunberg, and O.J. Simpson remain household names and in which the personal is still very much political. Thanks, in part, to that grounding, it's nigh impossible to read about Ultimate Corp—the massive company that has monopolized Nigeria's agriculture and technology—without thinking of the real-life corporations that control similar spheres in our own time. AO’s and DNA's experiences in their Ultimate Corp–saturated home settlements stand in stark contrast to life inside the stormy Hour Glass, where "non-Issues"—that is, non-Nigerians—live together in borderless harmony. That Ultimate Corp manufactured the means of its own demise brings a hopeful note to what could have been a depressing and agitating story.

A searing techno-magical indictment of capitalism from one of the strongest voices in fiction.