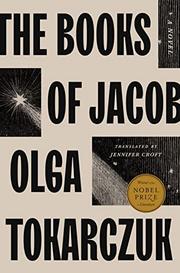 THE BOOKS OF JACOB

The latest novel by the Polish Nobel Prize winner to appear in English is a behemoth, both in size and subject matter: At nearly 1,000 pages, the book tackles the mysteries of heresy and faith, organized religion and splinter sects, 18th-century Polish and Lithuanian history, and some of the finer points of cabalist and Hasidic theology. At its center is the historical figure Jacob Frank, who, in the mid-1750s, was believed to be the Messiah by a segment of Jews in what is now Ukraine. Jacob preached that the end times had come and that morality, as embodied by the Ten Commandments, had been turned on its head. He led his followers to convert first to Islam and then, later, to Christianity. He himself was accused of heresy by all three major groups. Tokarczuk’s account is made up of short sections that alternate among various points of view. These include some of Jacob’s followers, a bishop with a gambling problem, a noblewoman who self-interestedly supports the “Contra-Talmudists’ ” attempt to convert to Christianity, and Jacob’s grandmother Yente, who is neither dead nor entirely alive, a state that allows her consciousness to roam widely, observing the novel’s action. Gritty details about the realities of daily life at the time alternate with dense passages in which Jacob’s followers argue about theology. “The struggle is about leaving behind that point where we divide everything into evil and good,” one says, “light and darkness, getting rid of all those foolish divisions and from there starting a new order all over again.” The book (which has been beautifully translated into English by Croft) has been widely hailed as Tokarczuk’s magnum opus, and it will likely take years, if not decades, to begin to unravel its rich complexities.

A massive achievement that will intrigue and baffle readers for years to come.