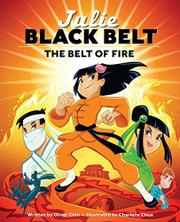 THE BELT OF FIRE

From the Julie Black Belt series

Rival yellow belts Julie and new student Brandon have thrown one another badly off their rhythms on the mat. Seeing this, their instructor, or Sifu, pairs them up and sends them outdoors for private lessons with his own teacher, Master Zhou—an elderly woman, in a very nice twist. In time, the two students become good partners, regain their mental balance and go on to ace their orange-belt tests. Rather than mention specific techniques, Chin intersperses hyperbolic lines such as “Brandon struck like a lion. Julie soared like an eagle.” Portentous statements include “Though sparks may fly, two blades can sharpen each other,” and “Kung fu means strengthening your own discipline and ability.” In a subplot capped by an anticlimactic, clumsily handled surprise, the author shoehorns in episodes from a parallel-themed martial arts movie for which Master Zhou apparently turns out to have been a technical adviser. Chua’s images of figures with wide, bright eyes—and in Julie’s case, a pink kitty hairpin—add plenty of visual syrup but not enough to make this palatable.