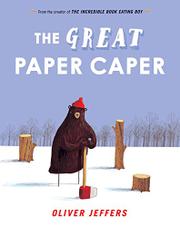 “There was a time in the forest / when everything was not as it should have been.” One autumn, the trees begin to vanish. At first the woodland creatures blame one another, but as the seasons change, they launch a full investigation, complete with yellow crime-scene tape. When a moose tips the investigators off, they follow the evidence to the bear’s house. Driven by his family’s legacy of paper-plane champions, the repentant bear explains he chopped the trees to make practice planes. The animal court requires the bear to plant replacement trees, but they also help their new friend by creating a giant paper plane out of his crumpled-up, failed aircrafts. Jeffers’s illustrations are meticulously designed, from the characters’ expressive eyeballs and stick-figure legs to the use of negative space and the way the text interacts with the artwork. Sophisticated readers may giggle over the mystery and mock trial, and adults may admire the undeniably hip artwork, but the story’s message is a bit convoluted, mixing themes of forgiveness, eco-consciousness and teamwork. (Picture book. 6-9)