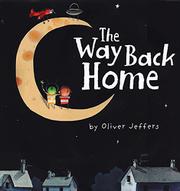 THE WAY BACK HOME

A boy (who bears a striking resemblance to the boy in Lost and Found, 2005 and How to Catch a Star, 2004) finds an airplane in his closet. Though he doesn’t remember putting it there, he decides he should take it out for a flight. After flying higher and higher, he finds himself stranded on the moon with a dying flashlight. Following scary sounds, he meets a friendly Martian in a similar predicament. They make a list of what they need in order to fix both crafts, and the boy parachutes back to Earth. He’s so tired, he initially forgets his mission. Then he remembers, gathers their equipment and hollers for the Martian to lower a rope. The two fix each other’s machines and say their goodbyes. A peek at the last page shows that the friendship is far from over. Jeffers’s latest tale of loneliness cured by friendship is as charming as his previous efforts. The space theme as well as the simple watercolor-and-pencil illustrations will please every young, imaginative adventurer. (Picture book. 3-6)