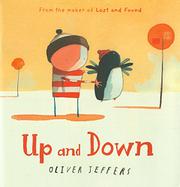 Jeffers revisits Lost and Found (2006), his sweet, muted story of friendship between a penguin and a boy, and he finds equal success with the same mild characters, understated humor, washes of watercolor and succinct, soft narration. Again, empathy emerges as elemental to this interspecies friendship, as the boy tries to help the penguin in his futile efforts to fly. Many failed attempts leave the two looking for answers at a circus, where they inadvertently lose track of each other. A quiet tone balances a relatively action-packed adventure: The penguin finally finds flight as he’s shot out of a cannon, and the boy, just having learned his whereabouts, rushes to catch him. Serene white backdrops highlight brilliant compositional choices, while full-page spreads of unconfined color depict dramatic moments with subtle force. Children will intuit, absorb and appreciate this soothing book’s heart—the fast, offbeat friendship that makes it so singular and appealing. (Picture book. 2-6)