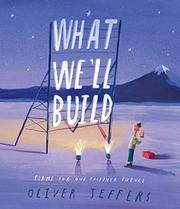 Plans for Our Together Future

An adult and child gather tools and prepare for a future together.

Some things they build are rife with symbolism, such as a shelter to store what they value (including some “love” they set aside) and futures they build for each other, depicted as a series of items in blue and pink waves that spring from a wristwatch. Others are more concrete, like the fortress they build to repel “enemies,” whom they later invite in for tea and apologies. Some of what they build is fantastical (a road to the moon). The book is dedicated to the author’s daughter and is considered a companion piece to Here We Are, published in 2017 and dedicated to his son, though the pair here could still be interpreted as having a different type of caretaker-child relationship. Camaraderie between the two is the thematic focus in this affectionate narrative. Portions of the text’s meaning are somewhat vague (the two lie next to a fire that will “keep us warm like when we’re born”), and the rhyming text, with moments of inconsistent meter, occasionally feels forced. Jeffers fills the pages with an odd, giggle-inducing assortment of creatures; the duo’s former foes include a one-eyed pirate, a witch, a Viking, and (in a very poorly timed choice) a white-coated doctor with a surgical mask, and there are a friendly octopus and birds in space helmets. Adult and child both present White. (This book was reviewed digitally with 11-by-19-inch double-page spreads viewed at actual size.)

Though straining in spots, it has the offbeat, sweet style Jeffers’ fans know and love.