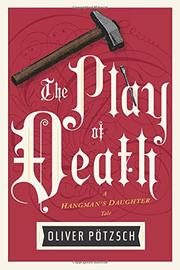 THE PLAY OF DEATH

In the shadow of Bavaria’s Kofel Mountain, "that old demon," Venetian dwarves, family rivalries, xenophobia, and greed make a witch’s brew of murders.

It’s spring of 1670, and Jakob Kuisl and his son-in-law, bathhouse keeper and town healer Simon Fronwieser, are dispatched from Bavaria’s Schongau to Oberammergau, where a murder by crucifixion has occurred. Kuisl is officially Schongau’s hangman, and thus he’s part of the "dishonorable class," but he's often dispatched as a trusted investigator by wily local elector (think prosecutor/judge) Johann Lechner. In Oberammergau, a Passion play is performed each decade as thanks to God for being spared from plagues. This time, however, locals have scheduled the play four years early. Oberammergau is in a panic, believing the crucifixion is divine retribution. As Simon’s wife copes with witchcraft charges and a despicable doctor with designs on her sister back in Schongau, Bavaria’s fear-ridden history haunts both narratives. Supporting characters include a tubercular schoolteacher, his assistant, the memorably cruel Poxhannes, assorted grumpy woodcutters and superstitious wagon drivers, and starving peasants lurking in cold, dreary huts. The plot is layered and complex, every corner a surprise as danger hides in smoke-filled taverns, lurks along muddy trails and in the forested mountains. Simon, vain but clever, and tough Jakob, with an iron core of honor, soon conclude that what’s revealed disguises the truth and powerful burghers want them dead. There’s an absorbing aside on salt’s importance in the late Middle Ages and an allusion to our modern reaction to immigrants—"Filthy laborers...like ticks and bugs"— in prosperous Oberammergau’s treatment of its imported workers.

Pötzsch’s (The Castle of Kings, 2016, etc.) sixth tale from the Hangman’s Daughter series chronicles another provocative mystery in an uncommon setting.