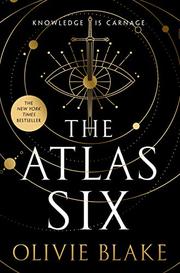 In a world very much like our own, except that a certain percentage of humanity is born with magical powers, six extraordinarily gifted people in their 20s are invited to train for membership in the Alexandrian Society, which has carefully and somewhat surreptitiously preserved centuries of priceless knowledge since the (apparent) burning of the Library of Alexandria. At the end of one year, five of the six will be initiated into the Society, and the reader won’t be surprised to learn that the sixth person isn’t allowed to quietly return home. As the year advances, the candidates explore the limits of their unique powers and shift their alliances, facing threats and manipulations from both within and outside of their circle. For most of its length, the book appears to be a well-written but not especially revolutionary latecomer to the post–Harry Potter collection of novels featuring a darker and more cynical approach to magical education; these books include Sarah Gailey’s Magic for Liars, Marina and Sergey Dyachenko’s Vita Nostra, and Lev Grossman’s Magicians series. Blake also offers a significant dash of the older subgenre of students joining a mystical cult requiring a sacrifice, as in Elizabeth Hand’s Waking the Moon and Robert Silverberg’s The Book of Skulls. The character-building is intense and intriguing—such an interior deep dive is practically de rigueur for a story of this type, which depends on self-discovery—but the plot doesn’t seem to be going anywhere surprising. Then, the book's climax devastatingly reveals that Blake was holding her cards close to the vest all along, delicately hinting at a wider plot which only opens up fully—or almost fully—at the end, when it shoves the reader off a cliff to wait for the next book.

A well-constructed prelude to what promises to be an interesting series.