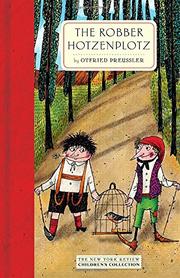 <p>Hotzenplotz's theft of a musical coffee mill set Kasperl and his straightman friend Seppel in pursuit of the notorious bandit. Their elaborate tracking simply snares them in the robber's den, and their involved escape includes outwitting a magician. The team of Kasperl and Seppel is sort of a lumbering counterpart of Laurel and Hardy. When described in full, their outlandish actions generally seem clumsy and foolish and not really terribly humorous. The book is translated from the German and is by the same author of Thomas Scarecrow and The Wise Men of Schilda (1963).</p>