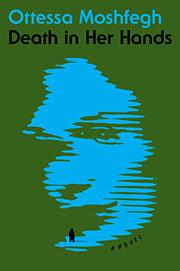 DEATH IN HER HANDS

A note suggesting a woman has been killed in the woods captures the imagination of an elderly woman, with alarming intensity.

Vesta, the extremely unreliable narrator of Moshfegh’s fourth novel (My Year of Rest and Relaxation, 2018, etc.), is a 72-year-old widow who’s recently purchased a new home, a cabin on a former Girl Scout camp. Walking her dog through the nearby woods, she sees a note lying on the ground which says that a woman named Magda has been killed "and here is her dead body," but there's no body there or any sign of violence. Call the police? Too easy: Instead, Vesta allows herself to be consumed with imagining what Magda might have been like and the circumstances surrounding her murder. Whatever the opposite of Occam’s razor is, Vesta’s detective work is it: After some web searching on how mystery writers do their work, she surmises that Magda was a Belarussian teen sent to the United States to work at a fast-food restaurant, staying in the basement of a woman whose son, Blake, committed the murder. Moshfegh on occasion plays up the comedy of Vesta’s upside-down thinking: “A good detective presumes more than she interrogates.” But Vesta slowly reveals herself as what we might now call a Moshfegh-ian lead: a woman driven to isolation and feeling disassociated from herself, looking for ways to cover up for a brokenness she's loath to confront. Over the course of the novel, Vesta’s projections about Magda's identity become increasingly potent and heartbreaking symbols of wounds from the narrator's childhood and marriage. The judgmental voice of her late husband, Walter, keeps rattling in her head, and she defiantly insists that “I didn’t want Walter in my mindspace anymore. I wanted to know things on my own.” You simultaneously worry about Vesta and root for her, and Moshfegh’s handling of her story is at once troubling and moving.

An eerie and affecting satire of the detective novel.