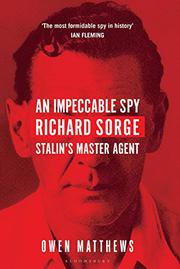 The life of a master secret agent who, unique among modern spies, infiltrated the highest echelons of both the German and Japanese governments during World War II.

Journalist and historian Matthews (Stalin’s Children: Three Generations of Love, War, and Survival, 2008) might be suspected of irony with his title, taken from an observation by the traitor Kim Philby, for though John le Carré considered Richard Sorge (1895-1944) “the spy to end spies,” he was sometimes dangerously undisciplined. He praised Stalin in a room full of Nazis, got drunk in a Tokyo bar and called Hitler “a fucking criminal,” and, while working in the German Embassy in Japan, loudly predicted that Germany would lose World War II. Born in the frontier town of Baku but raised in Germany, he served in the trenches on the Eastern Front, where he was converted to communism. Good with languages and charismatic, he became a spy for the Soviet Union, working in China and then Japan. His reports to his Soviet spymasters were not always believed, though they were accurate and full of dire warning. The spy ring that he put together in Tokyo had access to the highest levels of both Japanese and German intelligence. One key question centered on whether Japan would join with Germany to attack the Soviet Union; Japan concentrated its efforts on controlling Southeast Asia instead, as Sorge predicted, which allowed Stalin to free up thousands of tanks and planes and many divisions of troops to fight against the Germans. Eventually, Sorge slipped up and was imprisoned and executed. Matthews dismisses the long-held conspiracy theory that Sorge and the Soviets knew of the Japanese attack at Pearl Harbor before it happened. As he writes, although the Soviets benefited greatly from the work of Sorge, whom he calls “brave, brilliant, and relentless,” Sorge was in danger of being forgotten in the post-Stalin era until he was “rehabilitated” under Khrushchev and elevated to the “official pantheon of Soviet saints."

Fans of Alan Furst and similar authors will find this true-espionage story fascinating.