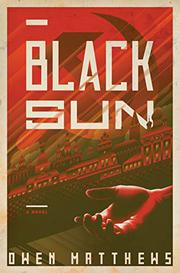 A murder investigation in a supersecret Soviet city reveals a number of surprises.

Fyodor Petrov dies miserably and alone in a "city that does not exist," where Soviet scientists and engineers secretly develop nuclear arms. Arzamas-16 is a fairyland within the grim reality of Soviet Russia: Consumer goods are freely available, subversive literature is openly read, and even the local KGB defers to the agenda of the cadre of scientists who work there. But Petrov's death sets off alarms, and Alexander Vasin, an investigator in "Special Cases," a quasi-independent branch of the KGB, is sent to nose around. Petrov was working on RDS-220, a superbomb, larger than any bomb previously developed anywhere, a project headed by professor Adamov, the de facto ruler of Arzamas-16. Petrov's death has been ruled a suicide by Gen. Zaitsev, who heads the local security forces; he resents Vasin's investigation and over time hampers it somewhat, but Vasin nevertheless manages to uncover good reason to doubt the suicide scenario and pursues his investigation, to the discomfort of a number of individuals. Matthews is especially adept at limning the bureaucratic infighting and political double-dealing that permeate Soviet society, but Vasin is able to cut through much of this, thanks in part to the power wielded by his boss, Gen. Orlov, and in the course of his inquiry learns quite a bit about nuclear weapons and the projection of power and deterrence. In Arzamas-16, politics and physics are inextricably entwined, as the investigation slowly reveals, and though the murder mystery solution is a long time coming, the depiction of the forces and behaviors animating Soviet life are compelling. Vasin, Adamov, Adamov's wife, Maria, and the scientists and functionaries of Arzamas-16 are well-constructed characters, and the persistence of history is a powerful tidal presence.

Despite a somewhat sluggish plot, this thriller provides many pleasures.