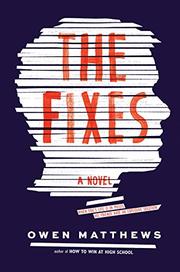 Eric is supposed to become a Connelly Man like his father, Sen. Donovan Connelly, by following the Plan: take a summer internship in a law firm, attend Stanford, build a career in corporate law, have a fine family, and run for office. He must “LIVE UP TO HIS POTENTIAL,” “MEET EXPECTATIONS,” and never, ever, “TARNISH THE FAMILY NAME.” The problem is that “Connelly Men do not hook up with guys,” and Eric has a crush on Jordan Grant, a rich, handsome, “one-way ticket to nowhere.” With Eric and a couple of girls, Jordan forms the Suicide Pack, and the four white students embark on a series of “fixes,” supposedly to fight the corruption and hypocrisy of their town. But it’s a descent into chaos—trashing offices, shoplifting, stealing cars, making bombs, and committing murder. The third-person omniscient narrator never lets the reader forget that Eric is a Connelly Man, even as Eric is anything but, though Eric’s training does, perhaps, allow for “Redemption. (Kind of.)” Matthews’ stylized, telegraphic prose style of short words, short sentences, and frequent, short (even one-word) chapters comes in handy as the story gathers momentum for a riveting final fifth, as Eric must find a way to stop the escalating violence.

A fast-moving tale of obsession and redemption.