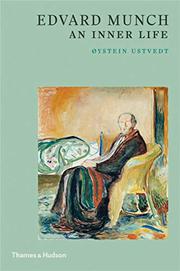 Norway's most lauded modernist reinvented his aesthetic aims throughout his long career.

Edvard Munch (1863-1944), famous for his haunting work The Scream, produced nearly 1,800 paintings and thousands of drawings, etchings, prints, sculpture, and photographs. In the 1950s, New York’s Museum of Modern Art mounted an extensive traveling exhibition of his works, and in 1963, the Munch Museum in Oslo opened on the centennial of his birth. Although Munch has been the subject of much scholarship, art historian and museum curator Ustvedt saw the need for an introduction addressed to general readers. He amply succeeds in this insightful, vibrant overview of Munch’s life and prolific oeuvre, deftly translated by McCullough and illustrated with a wealth of images. The author traces Munch’s development beginning in the 1880s, when he broke with past traditions and “successfully positioned himself as a radical revolutionary.” Munch identified an early painting, The Sick Child, as an artistic breakthrough: an effort to capture “the fleeting mood” of the sickroom with bold, layered brush strokes, streaming light, and blurred details. Throughout the 1890s, Munch became part of a circle of bohemian intellectuals in Paris and Berlin. An Artists’ Association exhibition in Berlin, however, scandalized some critics, who derided his paintings as “sloppy and unfinished” and not “morally edifying.” Munch welcomed the scandal, soon mounting his own exhibition—for which he charged an entry fee. Ustvedt recounts Munch’s doomed love affairs, mental breakdown, and artistic frustrations, all feeding works that evoked—with swirling movement, brash colors, and ghostly images—“the emotional rather than the rational”: anxiety, vulnerability, and “the inner life of the soul.” Though receptive to the “sensibilities of the age,” Munch delved deeply into his psyche, believing that art must be “forced into being by a man’s compulsion to open his heart. All art…must be created with one’s lifeblood.”

A beautifully produced introduction to a celebrated artist.