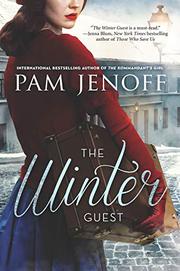 An 18-year-old Polish girl falls in love, swoons over a first kiss, dreams of marriage—and, oh yes, we are in the middle of the Holocaust.

Jenoff (The Ambassador’s Daughter, 2013, etc.) weaves a tale of fevered teenage love in a time of horrors in the early 1940s, as the Nazis invade Poland and herd Jews into ghettos and concentration camps. A prologue set in 2013, narrated by a resident of the Westchester Senior Center, provides an intriguing setup. A woman and a policeman visit the resident and ask if she came from a small Polish village. Their purpose is unclear until they mention bones recently found there: “And we think you might know something about them.” The book proceeds in the third person, told from the points of view mostly of teenage Helena, who comes upon an injured young Jewish-American soldier, and sometimes of her twin, Ruth, who is not as adventurous as Helena but is very competitive with her. Their father is dead, their mother is dying in a hospital, and they are raising their three younger siblings amid danger and hardship. The romance between Helena and Sam, the soldier, is often conveyed in overheated language that doesn’t sit well with the era’s tragic events: “There had been an intensity to his embrace that said he was barely able to contain himself, that he also wanted more.” Jenoff, clearly on the side of tolerance, slips in a simplified historical framework for the uninformed. But she also feeds stereotypes, having Helena note that Sam has “a slight arch to his nose” and a dark complexion that “would make him suspect as a Jew immediately.” Clichés also pop up during the increasingly complex plot: “But even if they stood in place, the world around them would not.”