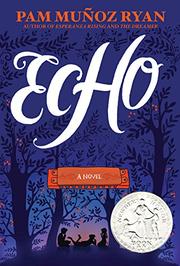 Sweeping across years and place, Ryan’s full-bodied story is actually five stories that take readers from an enchanted forest to Germany, Pennsylvania, Southern California, and finally New York City. Linking the stories is an ethereal-sounding harmonica first introduced in the fairy-tale beginning of the book and marked with a mysterious M. In Nazi Germany, 12-year-old Friedrich finds the harmonica in an abandoned building; playing it fills him with the courage to attempt to free his father from Dachau. Next, the harmonica reaches two brothers in an orphanage in Depression-era Pennsylvania, from which they are adopted by a mysterious wealthy woman who doesn’t seem to want them. Just after the United States enters World War II, the harmonica then makes its way to Southern California in a box of used instruments for poor children; as fifth-grader Ivy Lopez learns to play, she discovers she has exceptional musical ability. Ryan weaves these stories together, first, with the theme of music—symbolized by the harmonica—and its ability to empower the disadvantaged and discriminated-against, and then, at the novel’s conclusion, as readers learn the intertwined fate of each story’s protagonist.

A grand narrative that examines the power of music to inspire beauty in a world overrun with fear and intolerance, it’s worth every moment of readers’ time.