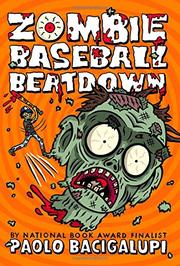 Upton Sinclair’s The Jungle meets Left for Dead/The Walking Dead/Shaun of the Dead in a high-energy, high-humor look at the zombie apocalypse, complete with baseball (rather than cricket) bats.

The wholesome-seeming Iowa cornfields are a perfect setting for the emergence of ghastly anomalies: flesh-eating cows and baseball-coach zombies. The narrator hero, Rabi (for Rabindranath), and his youth baseball teammates and friends, Miguel and Joe, discover by chance that all is not well with their small town’s principal industry: the Milrow corporation’s giant feedlot and meat-production and -packing facility. The ponds of cow poo and crammed quarters for the animals are described in gaggingly smelly detail, and the bone-breaking, bloody, flesh-smashing encounters with the zombies have a high gross-out factor. The zombie cows and zombie humans who emerge from the muck are apparently a product of the food supply gone cuckoo in service of big-money profits with little concern for the end result. It’s up to Rabi and his pals to try to prove what’s going on—and to survive the corporation’s efforts to silence them. Much as Bacigalupi’s Ship Breaker (2010) was a clarion call to action against climate change, here’s a signal alert to young teens to think about what they eat, while the considerable appeal of the characters and plot defies any preachiness.

Not for the faint of heart or stomach (or maybe of any parts) but sure to be appreciated by middle school zombie cognoscenti.