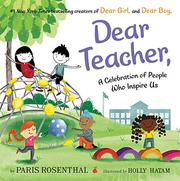 A Celebration of People Who Inspire Us

Equal parts love letter and gratitude to those who teach.

Teachers too often go unsung. Rosenthal sets out to change that. The opening spread doesn’t beat around the bush: A large “THANK YOU” is scrawled across a banner held by a group of beaming children. Thanks for what? “Just because.” Educators do their work everywhere, not just in the classroom, and Rosenthal and Hatam recognize this. They show inspiration happening in a youth orchestra, outdoors, a yoga studio, and various sports settings as well. Some of the platitudes may feel familiar—“Thank you for noticing I dream big and encouraging me to do just that”—but Hatam’s interpretations can put clever spins on oft-heard words; here, using white lines against a green background to emulate a chalkboard, she depicts a tot lassoing the moon. Children look up to their teachers with starry eyes, as Rosenthal understands (“You’re super kind, you’re super cool, and you’re my superhero!”), but often don’t fully appreciate their influence until later in their lives. Rosenthal actively encourages sharing the book with teachers—a later spread looks like a gift-wrapped box, with text reading, “this book is my gift to you”—but hopefully young readers will also be inspired to write thank-you notes of their own. Both teachers and children depicted are racially and ethnically diverse. (This book was reviewed digitally with 9-by-18-inch double-page spreads viewed at 60.2% of actual size.)

Expresses what many already know: Teaching is much more than just grades.