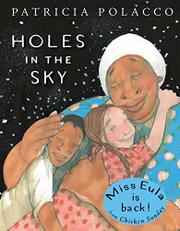 HOLES IN THE SKY

Trisha looks for signs from her grandmother in the sky but finds them closer than expected.

Trisha’s comfortably zaftig Russian grandmother tells her that stars are really “holes in the sky,” with the light of heaven gleaming through them. She says that she will be there soon but will watch over them, and she will send a sign to let them know. After Babushka dies, Trisha’s all-white family moves to the diverse city of Oakland, California, and Trisha becomes best friends with a black boy named Stewart. Stewart brings Trisha home to meet his grandmother Eula, a woman who cooks and gardens and whose shape echoes Babushka’s. Miss Eula mentions that Verna Bacci’s garden used to be the most beautiful on the block, before she lost her son in a terrible accident. The three of them decide to do something nice for Miss Verna, and the whole neighborhood pitches in. While Trisha has been searching the sky every night for a sign from Babushka, Miss Verna gets a sign from her son that they all can see. In the end, Miss Eula dabs vanilla behind Trisha’s ears just like Babushka used to, and Trisha realizes that her sign has been right in front of her. Polacco’s signature illustration style in sketched pencil and color emphasizes the relationships among people, just as the text celebrates the power of connection and the miracle of love in unexpected places.