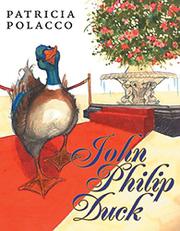 Edward and his father work for the Peabody Hotel in Memphis since the Depression has brought hard times for so many. On weekends they return to their farm in the hills and it’s there Edward finds John Philip Duck, named for the composer whose marches Edward listens to on the radio. Edward has to look after the scrawny duckling during the week, so he risks the ire of the hotel manager by taking John Philip with him. The expected occurs when Mr. Shutt finds the duckling. The blustery manager makes Edward a deal. If Edward can train John Philip to swim in the hotel fountain all day (and lure in more customers), Edward and the duck can stay. After much hard work, John Philip learns to stay put and Edward becomes the first Duck Master at the hotel. This half-imagined story of the first of the famous Peabody Hotel ducks is one of Polacco’s most charming efforts to date. Her signature illustrations are a bit brighter and full of the music of the march. An excellent read aloud for older crowds, but the ever-so-slightly anthropomorphic ducks will come across best shared one-on-one. (Picture book. 5-8)