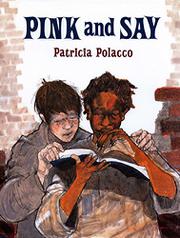 A white youth from Ohio, Sheldon Russell Curtis (Say), and a black youth from Georgia, Pinkus Aylee (Pink), meet as young soldiers with the Union army. Pink finds Say wounded in the leg after a battle and brings him home with him. Pink's mother, Moe Moe Bay, cares for the boys while Say recuperates, feeding and comforting them and banishing the war for a time. Whereas Pink is eager to go back and fight against "the sickness" that is slavery, Say is afraid to return to his unit. But when he sees Moe Moe Bay die at the hands of marauders, he understands the need to return. Pink and Say are captured by Confederate soldiers and brought to the notorious Andersonville prison camp. Say is released months later, ill and undernourished, but Pink is never released, and Polacco reports that he was hanged that very first day because he was black. Polacco (Babushka Baba Yaga, 1993, etc; My Rotten Redheaded Older Brother, above) tells this story, which was passed down for generations in her family (Say was her great-great-grandfather), carefully and without melodrama so that it speaks for itself. The stunning illustrations — reminiscent of the German expressionist Egon Shiele in their use of color and form — are completely heartbreaking. A spectacular achievement. (Nonfiction/Picture book. 4- 8)