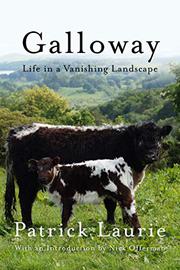 Life in a Vanishing Landscape

A Scottish farmer paints an intimate portrait of his home turf.

“I’m too late to know the old world, and too early to forget it,” writes Laurie. “I’m stuck in the middle and I’m scarred by the loss of wide places and lonely, calling birds.” Galloway, a small region of southwestern Scotland that ends in the Solway Firth, was once a region of grass and rock, lately covered up with commercial tree farms. That forestation has had material effects on two of Laurie’s prime subjects: It has ruined the grassy habitat of the curlew, a migratory shorebird, and it has deprived the ancient Riggits breed of cattle, “prized for their ability to graze on rough forage and then transform those thistles into high-quality meat.” Readers will learn just about all there is to know about both animals in the course of this appealing chronicle, organized to follow a farmer’s year, with month-by-month chapters and a lagniappe to honor the summer solstice. The education parallels Laurie’s own: He learns by doing and by talking to the fast-disappearing old-timers, their crofts turned into retirement cottages for wealthy people from south of the border. Some of what he learns turns out to be invaluable, some not quite so much, as when an old gamekeeper swears by the presence of a phantom: “Craigie herons aren’t magical or special beyond the realm of other birds; they just don’t exist.” Laurie’s narrative is a celebration of farming and the rural life, hard as it may be. “Owning and working land is no automatic joy,” he writes. “There’s no escape from undone chores and the smell of shit on your boots.” More than anything else, the book is also a requiem, as when Laurie laments that “things collapse at such a rate that soon we’ll look back on all the names we had for birds and wonder why we ever needed them.”

A lyrical, keenly observed addition to the top shelf of British nature writing.