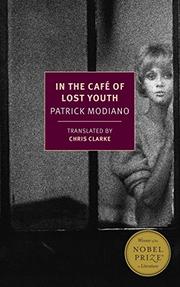 IN THE CAFÉ OF LOST YOUTH

“She had known right from the outset that things would turn out badly for us.” With names like Tarzan, Fred, and La Houpa, it’s no wonder the young, disaffected patrons of the Condé—collectively known as “the lost Youth,” and some of them true juvenile delinquents plunged unwillingly into early adulthood—are at a dead end. The war is over, the Nazis are gone, and meaning has been drained from life. Ah, but there’s always Louki to provide the lookie-loo itch for everyone to scratch, young and elegant and very quiet. Who is she, and why is she with “the brown-haired guy in the suede jacket”? So, at the formative stages of a minor obsession, ponders our initial narrator, whose point of view is just one of several. One might as well ask who anyone is, for, as that narrator reveals, everyone at the Condé lives in the present, no one talks about the past, and the smarter of the patrons are bound up in endless discussions concerning “pataphysics, lettrism, automatic writing, metagraphics,” and other such heady matters. Louki’s identity, always hazy, takes clearer form as the slender narrative progresses—and as it does, some of the entanglements become a little more dangerous, and to downright tragic effect in at least one case. Much of the novel is based on the informal circle run by the now canonical philosopher Guy Debord, whose double in this novel is himself obsessed by the escapist novel Lost Horizons. Modiano touches on themes of intellectual despair and ennui without ever quite slipping into Camus-ian bleakness, but more, he writes of memory, impression, and our cursed inability to know, truly know, what reality is, to say nothing of the person across the table from us.

Evocative and perfectly written—trademark Modiano, in other words.