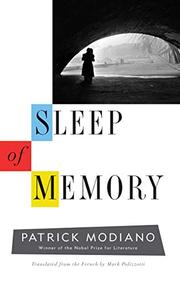 A languid, novelistic portrait of the artist—winner of the Nobel Prize in literature in 2014—as a young man.

“Those people you often wonder about, whose disappearance is shrouded in mystery, a mystery you’ll never be able to solve—you’d be surprised to learn that they simply changed neighborhoods.” So writes Modiano (So You Don't Get Lost in the Neighborhood, 2015, etc.), a master of postwar noir, blending Alan Furst’s matter-of-fact cynicism with Camus-ian aphorism. Here, he reflects on the era when, not yet 20, it began to dawn on him that women are very interesting creatures and that not everything is as it seems. “In the winter of 1964, in one of those dawn cafés—as I called them—when any hope seems warranted as long as it was still dark, I would meet up with a certain Geneviève Dalame.” Geneviève is a woman of parts, into the occult, who knows odd things and people; she lives in a hotel, gets up even earlier than the dawn café–haunting Modiano, and isn’t above smuggling interesting things (e.g., the log of an Edith Piaf recording session) out of the office to show him. The time seems fraught with—well, if not danger, then certainly change. As the author observes, it was a time when an old world was drawing to an end and a new one was about to be born, in which people no longer lived in hotels and joined Gurdjieff study groups. Geneviève is not without her own dangers, including a junior-mobster brother who threatens Modiano. And so are other women, one of whom, "whose name I hesitate to write,” just happens to “accidentally” shoot a mobster. Half a century later, they are all memories receding into the past, with no madeleine but silence to recall them.

A future biographer won’t be able to build much of a timeline of the events Modiano so evocatively describes, relics of a world that no longer exists. An elegant work of suggestion and misdirection.