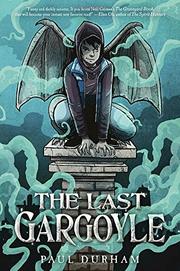 Chills and chuckles abound in Durham’s latest for middle graders.

Penhallow Fitch wants to make one thing clear: he is a Grotesque—not a gargoyle. Moving his stone form is excruciatingly difficult, but he is easily able to travel outside of his stone body as a “wisp,” “an apparition that exists but can’t touch or be touched by the living.” Even though he’s about 130 years old, he tells readers that he still prefers to take the form of a preteen boy with skin that is “maybe…darker than yours, or lighter.” Every Grotesque is charged with protecting those who reside within their Domain—in Penhallow’s case, a Boston apartment building. Soon, however, Netherkin—evil spirits—begin encroaching on Penhallow’s Domain, drawn particularly to a new family in the building. And there are whispers about a creature called the Boneless King. Determined to protect his wards, Penhallow teams up with a girl nicknamed Viola who can, against all odds, see and hear him, and together they work to uncover the mystery of the Boneless King and his connection to Penhallow’s Domain. Penhallow’s dynamic first-person narration provides just the right mix of humor and horror to spook but not terrify. A tidy wrap-up, while heavy on exposition, satisfies while still leaving potential for further tales. A glossary of “goyle-isms” is appended. Human characters are nominally diverse—the Domain’s residents are multicultural, and Viola is described as having East Asian features—but there is no attempt at cultural specificity.

Whether or not it’s planned, readers will hope for a sequel.