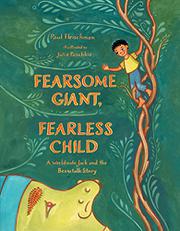 A Worldwide Jack and the Beanstalk Story

From the Worldwide Stories series

This latest in the Worldwide Stories series is a culturally eclectic remix of the “Jack and the Beanstalk” tale from the pair who looked at Creation tales in First Light, First Life (2016) and the Cinderella story in Glass Slipper, Gold Sandal (2007).

This confusing, composite variant scarcely resembles the “Jack and the Beanstalk” rendering that most North American readers might know. The author draws on the stories of 16 different countries from Indonesia to Gambia, the United States to Mongolia, interweaving them into one narrative that will require multiple reads to interpret. With monsters that include an ogre, witches, the devil, and a giant, readers will wonder where the familiar pieces of the story are. Those acquainted with the variant arguably best known in North America will recognize “Fee, fi, fo, fum! I smell the blood of an Englishman” but little else. For example, there are no magic beans in this retelling. Where the narrative lacks cohesion, the unifying thread is left up to the illustrator. Paschkis’ comely folk-art–style gouache paintings recall the tapestries and textiles of the various countries represented in the story, and readers will be able to discern the main character in each illustration. It’s a shame that more extensive notes than the pointer to SurLaLune Fairy Tales and Margaret Read MacDonald’s Tom Thumb (1993) are not offered for those curious readers who would wish to further pursue the divergent iterations presented here.

A clever but disjointed take, with no Jack and no beanstalk.