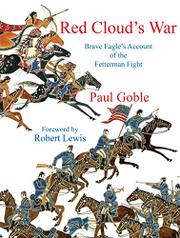 Young Brave Eagle describes the events leading up to the Battle of the Hundred in the Hands and the fierce encounter, sometimes called the Fetterman Fight for the glory-seeking captain who had led his soldiers into an ambush. There were no U.S. Army survivors. First published in 1972, this stirring story has been slightly reworked and reissued with additional material, including a forward from Native American storyteller Robert Lewis and an extensive list of references. In an opening author’s note, Goble explains that his imagined warrior’s narrative “attempts to capture the spirit of the published Indian accounts.” Maps introduce this history, and Goble’s dramatic color illustrations, digitized from his original ledger-style artwork, bring it alive. Groups of flat figures stand out on shiny white pages; they’re under, adjacent to, or nearly overwhelming the text. There’s glorious detail in the costumes, weapons, and even decorations for the horses. This is part of a series of reissues of early titles by this award-winning author/illustrator, welcome both for their good stories and for the care he’s taken to provide the sources and references that weren’t customary in children’s literature 40 years ago.