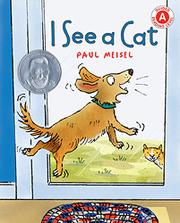 I SEE A CAT

Ten words may be all it takes to convince some young children to try reading.

An expressive dog, locked inside on a sunny day, is increasingly frustrated by its confinement. Each sentence begins: “I see a….” “Cat,” “bird,” “fly,” “squirrel,” “mice,” “bee,” and so on complete the sentence on successive subsequent double-page spreads. Almost all the action takes place on the other side of a sliding-glass door. Only the fly is inside, buzzing annoyingly around the dog in four vignettes. When a brown-skinned child appears, the dog is clearly delighted. Freed at last, the dog immediately chases the squirrel up a tree. Despite its limited vocabulary, Meisel’s simple story is surprisingly satisfying. New readers will fill in the missing details from clues in the uncluttered illustrations, several spreads of which are completely wordless. For example, the child is first shown with a backpack—just returning home from school, perhaps? Even before the title page, a wordless frontmatter sequence begins the story. On the title page the dog’s eyes clearly signal displeasure at having to come inside. “Squirrel,” the hardest of the 10 words used, appears three times, providing practice while also making it clear that the squirrel is dog’s chief antagonist. The repeated sentence structure helps build confidence and fosters reading fluency.

Another successful addition to the I Like to Read series: “I see a winner!” (Early reader. 4-8)