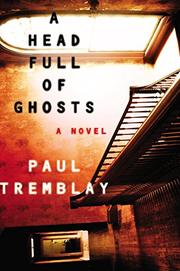 A HEAD FULL OF GHOSTS

When a teenager exhibits early signs of schizophrenia, her parents turn not to traditional psychiatry but to a Catholic priest determined to drive out demons and a sleazy reality TV show eager to get the whole fiasco on tape.

Fifteen years ago, the Barretts were just a typical Massachusetts  family: father John, mother Sarah, and two daughters, Marjorie, 14, and Merry, 8, who got along well and often wrote stories together. Though John had lost his job, the family managed to stay afloat. Then Marjorie's behavior changed from normal teenage angst to something more disturbing. Tremblay (No Sleep till Wonderland, 2010, etc.) intercuts the past with present-day scenes of Merry being interviewed by an author writing a book about the Barretts' decision to allow their life to be televised on The Possession. It was John, with his renewed faith in God, who pushed for a Catholic intervention—an exorcism, à la Linda Blair—and Sarah finally agreed. Their priest, Father Wanderly, had connections to the television series, and going on the show offered a way for the Barretts to avoid defaulting on their mortgage. The TV crew moved into the family home, and yet, instead of capturing the "truth," an even more elaborate fiction began to play out, with deadly consequences. As the adult Merry's memories clash with the televised version of events leading up to the climactic final episode of The Possession—it's not spoiling too much to say that everything that could go wrong does—readers will begin to question if anyone in the house is truly sane.

Tremblay expertly ratchets up the suspense until the tension is almost at its breaking point.